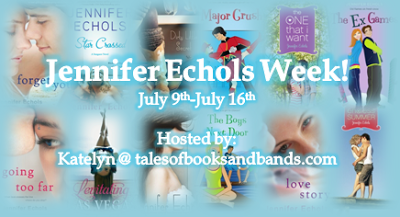 Thank you Katelyn at Tales of Books and Bands for hosting
Jennifer Echols Week!

Some people like to pair wine with a good meal, but I prefer to pair a cupcake with a good book boy. Here are a few of my favorite "Jennifer Echols' boys" and the flavor they would be if they were, in fact, a cupcake.

(In a perfect world, you would be able to "click" on the the photos below and the cupcake associated with it would pop out of your computer...)


Grayson ~ Such A Rush

Cupcake Flavor: Lemon Blueberry. You might think the tangy lemon would overpower the sweetness of the blueberry, but one taste of this unlikely combination reveals a surprisingly refreshing flavor. Why We Love him: Grayson is grieving and that can bring out the ugly in anyone, you know, like their blackmail tendencies. But Grayson's not just another hot body in aviators, the boy can fly a plane!  He comes through for Leah too, like a knight in shining wingspan, reminding her that love isn't something that has to be earned.

First Impression: He has "Heart breaker" written all over him.

Cupcake Flavor: Double Chocolate.You can see it's bad for you, but you just can't stop yourself from eating one, or ten.

Why We Love him: There were plenty of times I wanted to kick Sam in the shins. I mean, how much more of a selfish jerk could he be to Bailey?  But behind his smooth talkin' swagger, Sam's insecure, afraid he'll end up a chip off the 'ole block. It's takes one tough cupcake like Bailey to set him straight and when she does Sam will be dancin' away with her heart! (Ours too.)

First Impression: Tall, dark and in need of a serious attitude adjustment.

Cupcake Flavor: Chocolate Chip Cookie Dough. Looking at it, you think you're just getting a regular vanilla cupcake with chocolate frosting, but one bite reveals a surprise filling of warm, gooey deliciousness. Why We Love Him: He's been given the shaft in more ways than one, (I'm glaring at you Doug's Dad.) Underneath all that protective bravado, Doug's a sweetheart. He's also a hard worker and Oh.Em.Gee...He pulls Zoe from a BURNING CAR! Never mind that she doesn't remember yet.

First Impression: Dude needs to pull the stick out of where the sun don't shine.

Cupcake Flavor: Peanut Butter Oreo.This cupcake is complicated. A layer of peanut butter is sandwiched between two Oreos and hidden inside a chocolate cupcake. It's delicious, but complicated.

Why We Love Him:  Man in uniform. Need I say more? Okay, yes, because Officer After has a heart of gold and abs of steel. He sees the good in Meg and is determined to make her see it too. John also understands the value of a life and refuses to let Meg settle, which is exactly what she needs.


First Impression: Friend zoned, or what?

Cupcake Flavor: S'more.  Just like it's fireside counterpart, these cupcakes will have you wishing for an endless supply and saying, "S'more please!" Why We Love him: Adam is sweet, funny and doesn't let Lori's obsession with his brother Sean keep him from proving to her that he is the one she should be with!
Determined or what?