October 25, 2016
Welcome to Jenuine Cupcakes, this is my stop on the Gemina blog tour! 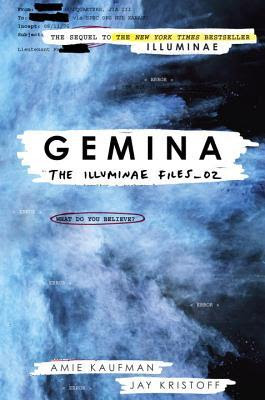 Moving to a space station at the edge of the galaxy was always going to be the death of Hanna’s social life. Nobody said it might actually get her killed.

The sci-fi saga that began with the breakout bestseller Illuminae continues on board the Jump Station Heimdall, where two new characters will confront the next wave of the BeiTech assault.

Hanna is the station captain’s pampered daughter; Nik the reluctant member of a notorious crime family. But while the pair are struggling with the realities of life aboard the galaxy's most boring space station, little do they know that Kady Grant and the Hypatia are headed right toward Heimdall, carrying news of the Kerenza invasion.

When an elite BeiTech strike team invades the station, Hanna and Nik are thrown together to defend their home. But alien predators are picking off the station residents one by one, and a malfunction in the station's wormhole means the space-time continuum might be ripped in two before dinner. Soon Hanna and Nik aren’t just fighting for their own survival; the fate of everyone on the Hypatia—and possibly the known universe—is in their hands.

But relax. They've totally got this. They hope.

Once again told through a compelling dossier of emails, IMs, classified files, transcripts, and schematics, Gemina raises the stakes of the Illuminae Files, hurling readers into an enthralling new story that will leave them breathless.

Click here to read my review of Book 1: Illuminae

Sci-Fi/Space/Books That Are Smarter Than Me are not my usual go-to jams, I'm more of a romance-with-a-side-of-any-other-genre kind of girl, however, this series is special. Not only did it suck me in from the very start, Illuminae, Book One in the series, had a similar effect on both of my boys, ages 12 and 16. I can't remember the last book all three of us read at the same time and enjoyed talking about.

When Gemina arrived in the mail, it was like Christmas morning!

My youngest son tag-teamed both the book and the audio, which made for an even more enjoyable reading experience.

Audio: Not enough stars in the universe! If Illuminae hadn't ruined me for other audiobooks, Gemina certainly would have. Seriously. Part of me wants to see this story on the big screen but the other part of me doesn't because the audio cast is SO FREAKING FANTASTIC. Anyone else would pale in comparison.

(Steve West and MacLeod Andrews, two of my absolute favorite narrators are part of the cast. I've suffered through other less than stellar books JUST because I wanted to keep listening to the sound of their voice(s). Wow, okay...that sounds a lot creepier on the page than it did in my head. Anyway. What I mean is, either of these two could read my grocery list and make it sound amazing.)

Story: Okay, so this is harder to put into words without spoiling anything, so I'll use some gifs....

Opening to the first page of Gemina and pressing PLAY on the audio like, okay, I'm ready.

Meeting Nik and Hanna and Jackson and Ella.

Nik, Heimdall's resident bad boy, has enough charisma to charm to the spacesuit off pretty much any girl he wants to, but he has sight set on Hanna.
Hanna is Princess Heimdall, though she kicks a*s and takes names as well--if not better than the guys on board. She has Jackson, her dad's right hand man, wrapped around her whispernet and scrawling "J + H 4Eva" into his palm pad.
Ella is a hacker genius, and my favorite character.

Oh, and Hanna and Nik supposedly don't like each other.

Uh huh, I wasn't buying it either. These two put the "T" in Tension.

But then Jump Station Heimdall is invaded by a bunch of BeiTech lackies, which is so not "bliss", and all kinds of crazy shizz starts going down and I'm like...

Kady and Ezra and AIDAN show up and things are a little better, but then I'm confused and seriously...

Gemina is an action packed, heart-stopping, head-spinning, mind-blowing companion/sequel that DOES NOT disappoint! Do yourself a favor and read it. You won't regret it, I promise.

~ GIVEAWAY ~
One copy of GEMINA (provided by the publisher)
Must be 13 years old to enter
U.S. Only