BLOG TOUR: Confessions of an Almost-Girlfriend by Louise Rozett

Welcome to Jenuine Cupcakes!
This my stop on the Confessions of an Almost-Girlfriend blog tour hosted by YA Bound Book Tours.  Click HERE to see the full blog tour schedule! Rose Zarelli has big plans for sophomore year—everything is going to be different. This year, she’s going to be the talented singer with the killer voice, the fabulous girl with the fashionista best friend, the brainiac who refuses to let Jamie Forta jerk her around...

...but if she’s not careful, she’s also going to be the sister who misses the signals, the daughter who can only think about her own pain, the “good girl” who finds herself in mid-scandal again (because no good deed goes unpunished) and possibly worst of all...the almost-girlfriend.

When all else fails, stop looking for love and go find yourself.

My Thoughts
What I Loved: Louise Rozett has done it again!  She truly captures the voice of Rose, giving readers a realistic look into the life of a teenager that is both heartbreaking and hopeful.

This book deals with depression which isn't always the angsty, weepy, person who refuses to get out of bed, eat or has thoughts of ending their life.  Sometimes, it's the person whose stuck in a kind of "nothingness" that they can't seem to escape. They want to feel, but they just can't. (I have struggled with both.)

This is where we find Rose in CONFESSIONS OF AN ALMOST-GIRLFRIEND, stuck in the nothingness. She is surrounded by people and situations that should garner an emotional reaction, but don't. Yes, there's the occasional outburst of feeling - anger, desire, frustration and confusion, but for the most part, she's just going through the motions of her life. It would have been very easy for Rozett to lead us into the "nothingness" with Rose and leave her there, but she doesn't.  She chooses instead to provide a way out for Rose, a way for her discover who she is, what she wants and most importantly, how to love herself. It's raw, emotional and painful, but it's real.

As with CONFESSIONS OF AN ANGRY GIRL, there is an engaging cast of supporting characters (everyone needs an Angelo in their lives) and while I did manage to feel more compassion for Regina and her family, I still don't trust her as far as I can throw her.

And then there is the tall, dark and brooding Jamie Forta. Rose wants nothing and everything to do with Jamie all at the same time because he actually does make her feel things. (Me too Rose, me too.) But Jamie remains elusive and just when she thinks she has him figured out, he retreats into the familiarity of his own struggles which broke my heart for both of them. I was torn between wanting to hug all of Jamie's pain away and shaking some sense into him while yelling, "YOU ARE WORTH ALL THE LOVE! JUST LET THEM LOVE YOU JAMIE!"

Did I mention this is what I imagine Jamie looks like? (Which would explain the hugging)...

What Left Me Wanting More: FOR THE LOVE OF ALL THAT IS JAMIE FORTA, PLEASE LET THERE BE A THIRD BOOK! PLEASEPLEASEPLEASE! *bribes Harlequin Teen with cupcakes*

Favorite Quote: "But when Jamie Forta is looking at me, I wish with every bone in my body that I were beautiful."

Final Verdict: Emotional, heartrending sequel that will break your heart in all the right ways. READ IT! 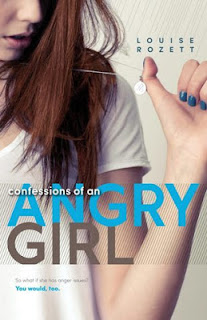 Rose Zarelli, self-proclaimed word geek and angry girl, has some confessions to make…

1. I'm livid all the time. Why? My dad died. My mom barely talks. My brother abandoned us. I think I'm allowed to be irate, don't you?

2. I make people furious regularly. Want an example? I kissed Jamie Forta, a badass guy who might be dating a cheerleader. She is now enraged and out for blood. Mine.

3. High school might as well be Mars. My best friend has been replaced by an alien, and I see red all the time. (Mars is red and "seeing red" means being angry—get it?)

Here are some other vocab words that describe my life: Inadequate. Insufferable. Intolerable.

(Don't know what they mean? Look them up yourself.)

Louise Rozett is an author, a playwright, and a recovering performer. She made her YA debut with Confessions of an Angry Girl, published by Harlequin Teen. The next book in the series, Confessions of an Almost-Girlfriend, is due out June 2013. She lives with her 120-pound Bernese Mountain dog Lester (named after Lester Freamon from THE WIRE, of course) in one of the world's greatest literary meccas, Brooklyn...and also in sunny Los Angeles. (Being bi-coastal is fun!