Hey, thanks for stopping by Jenuine Cupcakes!  I'm really excited to be a part of the Losing It Blog Tour!

*hands you a cupcake*

*and a fan for your face* 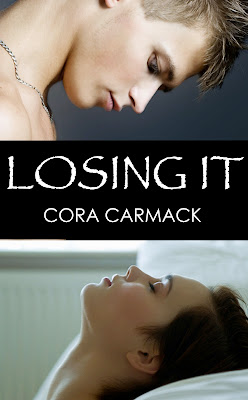 Bliss Edwards is about to graduate from college and still has hers. Sick of being the only virgin among her friends, she decides the best way to deal with the problem is to lose it as quickly and simply as possible-- a one-night stand. But her plan turns out to be anything but simple when she freaks out and leaves a gorgeous guy alone and naked in her bed with an excuse that no one with half-a-brain would ever believe. And as if that weren't embarrassing enough, when she arrives for her first class of her last college semester, she recognizes her new theatre professor. She'd left him naked in her bed about 8 hours earlier.


Finished drooling over the cover yet?


OK, good because there's lots of fun stuff to enjoy, like an interview with the fabulous Cora Carmack, a giveaway an-- *snaps fingers* Hey! I know the guy is cute but I'm gonna need you to focus here because I share my .02 about Losing It* too.
*Losing It is New Adult and for those who aren't familiar with this fast growing genre, it usually encompasses the college age/twenty somethings and features more mature subject matters.


"Sometimes it's the scary things in life that are the most worthwhile."

Kissing, laughter, drama, and heart racing romantic tension, Losing It has it all!  I was so excited to have a chance to read this and enjoyed so much about this story, especially main character, Bliss Edwards. She's spent most of her life "in control" but when she meets Garrick, almost all of her resolve flies out the window. (I can't say I really blame her.)  Their first encounter starts out well with witty banter and kisses hot enough to make you forget your name but quickly spirals into awkward leaving them both wondering, "What just happened?"  Things go from bad to KILL.ME.NOW when Bliss discovers Garrick is her new teacher. (OhEmGee) If the thought of seeing him every day doesn't do her in, the shame of their secret just might.

When her life begins to imitate the art she loves so much, Bliss will have to decide what's worth holding onto and what she needs to let go of.  She learns some tough lessons about love, forgiveness, and friendship while discovering that following your dreams is never easy but the things we want most in life are always worth the risk. Always.

Carmack tells the story of one young woman's struggle to live life the best she can with equal parts humor, heartache and romance. Even if you don't agree with everything these characters are doing, you can't help but admire their genuineness. Bliss is funny, beautiful and sweetly awkward making her completely relateable. Kelsey and Cade (I *hearts* him, btw) are the kind of BFF's who occasionally push the limits but who are always there when you need them. Garrick, with his good looks, brains and talent, is the total package. *swoons*

This story addresses the topics of virginity, sexuality and love and I think Carmack handles these with both sensitivity and maturity. *hi fives her* In a day and age where one-night stands, random hook-ups and "friends with benefits" have become socially acceptable, it's refreshing to read a story where the characters don't take virginity lightly and often go to hilarious lengths to avoid discussing it. (Humane Society anyone?) Sex should be a physical expression of love between two people, and as Bliss learns, it's kinda hard to love someone you just met. (Love, the real, long lasting kind, takes time.) There's also nothing wrong with choosing to save yourself for marriage either. :)


1) What inspired you to write Losing It?

Oh gosh. A lot of things. The idea came to me because I just have a tendency to think of really awkward, terrible situations. But then I filled it in with truths from my own college years, and in many ways it became a tribute to my time at university. Bliss is very much so a blending of myself and a good friend. I don’t want to give things away, but I’ll tell you that one part with an accordion and a certain party and its consequences were most definitely inspired by real events. I promise I didn’t fall in love with my professor though. :)

Hmm… that’s difficult. I don’t know if this song describes Bliss so much as represents how she wants to be and feel, but Many the Miles by Sara Bareilles. It’s all about living to the fullest and new experiences. Or in honor of Bliss’s theatricality, I think she could identify with the song My Junk from Spring Awakening.

3) What do you hope readers will take away from Bliss's story?

I think I just wanted to show a very different kind of leading lady. There have been plenty of books about the pretty girl or the shy girl or the broken girl, but no one talks about the awkward girl. She’s generally a secondary character good for a few laughs. I wanted to show a character and a relationship that was a little more realistic, without necessarily losing that heightened sense of romance that to which readers are drawn. And I think Bliss’s situation is something a lot of girls, possibly every girl, can identify with in some way. Virginity and awkward go hand in hand.

4) What's the last book you read that you loved?

Ooo… good question. Probably On Dublin Street by Samantha Young or Prodigy by Marie Lu or Bridge to Terabithia. I try to vary my reading. :)

5) Do you have a go to writing snack?

Anything chocolate will do or a glass of wine. I write best when I’m relaxed or just having fun with my characters.

6) If you could have dinner with any author, literary character or superhero, who would it be and why?

Ooo… author has to be J.K. Rowling. That’s predictable, but J.K. Rowling is my Queen! Literary Character would be hands down Daemon from the Lux Series by Jennifer L. Armentrout.

7) If you weren't writing, what would you be doing?

Wasting away into nothingness. Oh, wait, you probably meant as a job. Well, I’ve had a lot of jobs (and I’m not that old). So, I would probably continue to do the same, hopping from career to career until I found something I loved as much as writing. It would definitely have to be something creative. I don’t handle monotony well.

Thanks so much Cora!


You can buy LOSING IT at
Amazon |  Barnes & Noble