October 02, 2013
I have some EXCITING news to share with you!
Last night, Harlequin Teen held an exclusive preview party in NYC where they featured Jennifer L. Armentrout's, WHITE HOT KISS and a super seekrit reveal from Julie Kagawa.
Unfortunately, neither Mandy (YABC) nor myself were able to attend, BUT Lisa Wray, Harlequin Teen Publicity Super Star, was kind enough to email all of the details.
The catch? The information was embargoed, until Harlequin Teen made the official reveal this morning.
BUT NOW I CAN SHARE ALL THE SPARKLY DETAILS!!

Julie Kagawa, New York Times and USA TODAY bestselling author of the award-winning Iron Fey series and the critically-acclaimed Blood of Eden series, has a new book coming out and get this, it's already been optioned for the big screen! 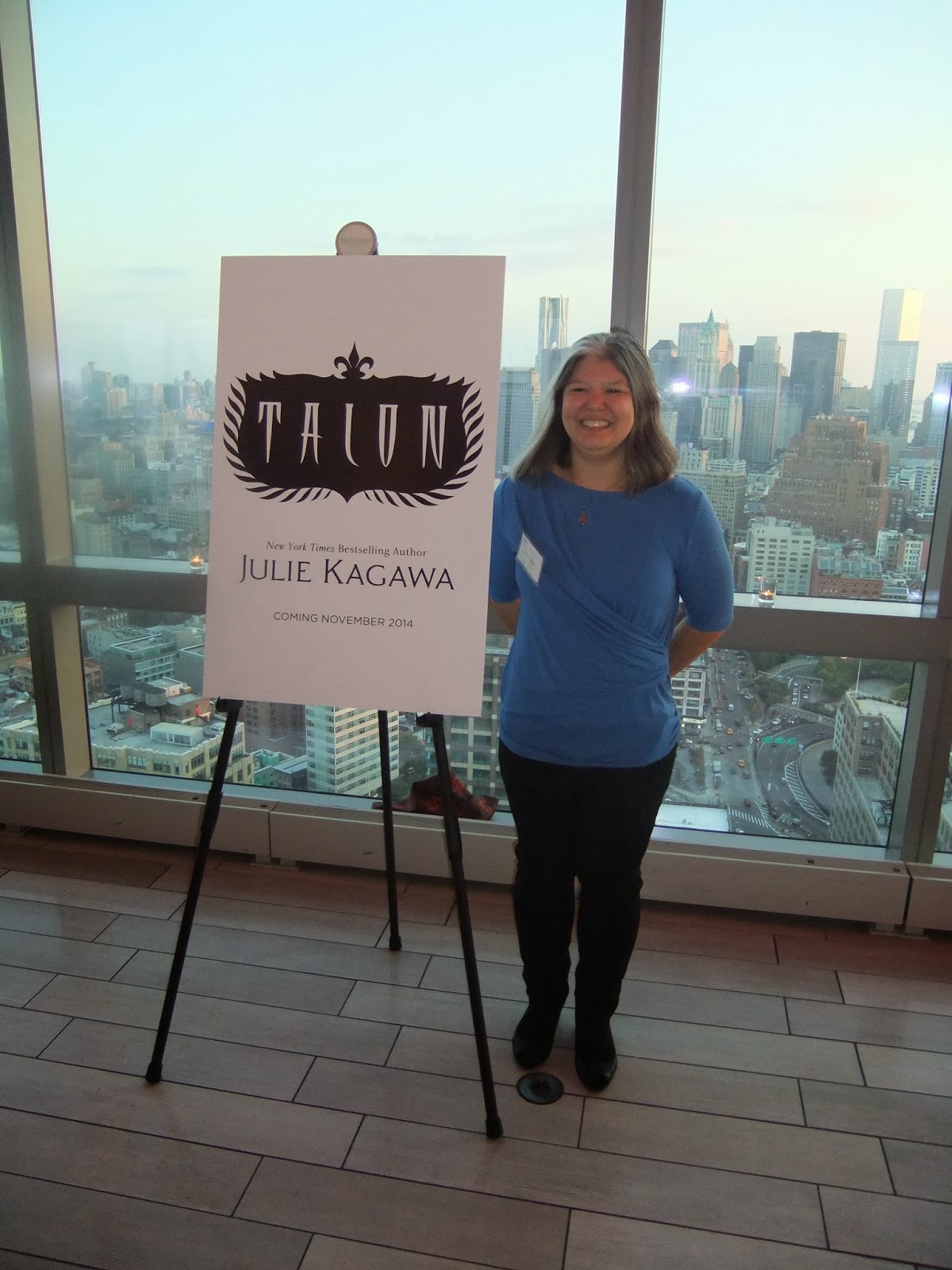 The series revolves around dragons with the ability to disguise themselves as humans and an order of warriors sworn to eradicate them. The dragons of TALON and the Order of St. George have been at war with each other for centuries. The fabled creatures, whose existence is unknown by the general public, are determined to rule the world. Their foes, a legendary society of dragon slayers, are equally bent on driving the fabled beasts into extinction. However, when a young dragon and a hardened slayer unknowingly befriend each other, it has severe repercussions for both organizations.

“I’ve always been fascinated by dragons because no other mythological creature is as complex,” said Kagawa. ”They can be ruthless, savage monsters or loyal and noble protectors. That led me to thinking about dragons in the modern world—how they would adapt and fit in. How would they live? Would they have jobs? What about emotions and love? I hope to answer all these questions in TALON, while at the same time sneaking in the parts we all love in dragon stories—flying, fire-breathing lizards of doom.”

“Julie Kagawa breathes new life into every mythos she takes on, and with her modern dragon world, she outdoes even herself,” said Natashya Wilson, Executive Editor at Harlequin TEEN. “Unique and unforgettable, TALON is both a wildly entertaining read and a relevant book that explores the dangers of blind prejudice and absolute power and the transformative nature of love.”

Universal Pictures has picked up the film rights to TALON with Chris Morgan attached to produce. Morgan is the writer of the studio’s Fast & Furious franchise and the upcoming Keanu Reeves samurai movie, 47 Ronin, as well as the producer of the recently announced The Legend of Conan film starring Arnold Schwarzenegger.

“With TALON, Julie Kagawa has created an epic romantic adventure that is sure to be a benchmark saga of dragon lore,” said Morgan.  ”I’m incredibly excited to help bring her vision to the screen.”

Julie Kagawa is the author of two previous series—the Blood of Eden series, optioned by Joni Sighvatsson of Palomar Pictures, and the New York Times and USA TODAY bestselling Iron Fey series. Kagawa’s titles have been published in more than 20 countries, including the United Kingdom, Australia, France and Germany.

For more information about the movie option, click here: http://www.hollywoodreporter.com/heat-vision/fantasy-author-julie-kagawa-sells-419678
About Julie Kagawa
Julie Kagawa is the New York Times and USA TODAY bestselling author of the award-winning Iron Fey series and the critically-acclaimed Blood of Eden series. Born in Sacramento, California, she moved to Hawaii at the age of nine. Julie now lives near Louisville, Kentucky, with her husband and a plethora of pets. For more information on Julie, visit JulieKagawa.com.

About Harlequin
Harlequin (www.Harlequin.com) is one of the world’s leading publishers of books for women, with titles issued worldwide in 34 languages and sold in 110 international markets. The company publishes more than 110 titles monthly and more than 1,300 authors from around the world. Harlequin is a wholly owned subsidiary of Torstar Corporation (www.torstar.com), a broadly based media company listed on the Toronto Stock Exchange (TS.B). Harlequin’s website is located at Harlequin.com. Harlequin has offices in 18 countries, including offices in Toronto, New York and London. For more information, please visit Harlequin.com and Facebook.com/HarlequinBooks. Follow Harlequin on Twitter: @HarlequinBooks.