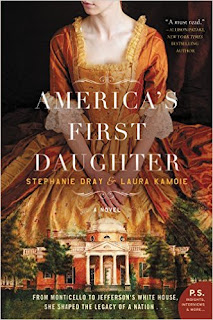 In a compelling, richly researched novel that draws from thousands of letters and original sources, bestselling authors Stephanie Dray and Laura Kamoie tell the fascinating, untold story of Thomas Jefferson’s eldest daughter, Martha “Patsy” Jefferson Randolph—a woman who kept the secrets of our most enigmatic founding father and shaped an American legacy.

From her earliest days, Martha "Patsy" Jefferson knows that though her father loves his family dearly, his devotion to his country runs deeper still. As Thomas Jefferson’s oldest daughter, she becomes his helpmate in the wake of her mother’s death, traveling with him when he becomes American minister to France. And it is in Paris, at the glittering court and among the first tumultuous days of revolution, that she learns of her father’s liaison with Sally Hemings, a slave girl her own age.

Patsy too has fallen in love—with her father’s protégé, William Short, a staunch abolitionist intent on a career in Europe. Heartbroken at having to decide between being William’s wife or a devoted daughter, she returns to Virginia with her father and marries a man of his choosing, raising eleven children of her own.

Yet as family secrets come to light during her father's presidency, Patsy must again decide how much she will sacrifice to protect his reputation, in the process defining not just Jefferson’s political legacy, but that of the nation he founded.

I don't read a lot of Historical Fiction, but a few months ago, I tripped and fell down the rabbit hole known as Hamilton (the musical) and haven't been able to get enough of the Revolutionary War period since.

AMERICA'S FIRST DAUGHTER is engrossing, emotional, and kept me turning the page well into the night. The extensive research the authors have done is evident, but blends together beautifully with fiction, creating a story that will satisfy even the most critical of historians while also appeasing readers (like me), who came for the chocolate drops and the hint of romance.

February 28, 2017
Thanks for stopping by, there be cupcakes here today! *whispers* Really creepy cupcakes. If you have followed this blog or my Instagram or Pinterest board for any length of time, you've probably seen some of the bookish cupcake creations I've made over the past few years. Book inspired cupcakes, characters as cupcake flavors, release party cupcakes, that sort of thing. Making cupcakes for people makes me happy.  However, of all the different kinds of cupcakes I have been asked to make, today's definitely take the cake--or the cupcakes--or the finger.  Wait. What?  Stay with me, I'll explain.  But first... Author: Jennifer L. Armentrout Publication: February 28, 2017 By: William Morrow Amazon | Barnes & Noble | Goodreads | iTunes/iBooks | Indie Bound | Book Depository In New York Times bestselling author Jennifer L. Armentrout’s gripping new novel, a young woman comes home to reclaim her life—even as a murderer pl
12 comments
Read more

December 26, 2012
Thanks for stopping by Jenuine Cupcakes! 2012 has been an epic reading year for me and wh ile h aving to choose the BEST of anything is never easy , I pre sent you with a sampling of my Best of 2012. (You'll notice, I've made up a few of the categories to fit my needs but all of these books are fantastic . ) Best Fantasy Shadow and Bone (The Grisha #1) by Leigh Bardugo Best Dystopian/Sequel/People Forgot The MC Was Grieving Insurgent (Divergent #2) by Veronica Roth Best Sci-Fi /A ction /Made Me Beat My Husband U p I n My Sl eep False Memory ( F alse Memory #1) by Dan Krokos  Best Dystopian/Sci-Fi Mashup /I Sa w The Other Hot Boy First Defiance by C.J. Redwine        Best P sychological Thriller /This Book Might Kill Me Be fore It Ends The Evolution of Mara Dyer (M ara Dyer #2) by Michelle Hodkin Best Scared T he Jelly Belly's Out of Me (Because it could happen) Ashen Winter (A shfall #2) by Mi ke Mullins Best Boo
166 comments
Read more